The question of whether progress is a valid concept in music is one over which much ink has been spilled by musical theorists and philosophers. On the level of expression and content the answer ought to be obvious: musical composition cannot be said to ‘advance’ in Hegelian fashion if that is taken as implying that later composers de facto write better music than earlier ones because of the cumulative acquisition of scientific knowledge during the intervening years. There are admittedly some domains of musical science in which to talk of advances in knowledge is legitimate (orchestration, for example, which is in some ways the most ‘technological’ of musical parameters, or investigations into the nature of timbre). But this does not make Strauss ‘superior’ to Mozart, Dutilleux to Dufay or Boulez to Bach simply because their scores are more complex, the notation more refined; to judge in such a fashion is to make a category mistake. The masterworks of the past have a perennial greatness to them which, like that of poetry, has little or nothing to do with their contribution to a supposed onward march of progress but everything to do with the perfect correspondence they demonstrate between artistic aims and the means employed.

A similar situation might be said to apply when it comes to building musical instruments. It cannot be disputed that we have never known more about the science of instrumental construction (including the techniques of past centuries) nor had access to such accurate tools of calibration as are available to us through precision engineering and computer modelling. There is no doubt that this scientific baggage is extremely useful,  yet when it comes to questions of tonal beauty rather than mechnical efficiency the technology is of secondary importance in comparison to the physical properties of the natural materials involved. As anyone who has been overwhelmed by the sound of a Stradivarius, vintage Bechstein grand piano or the collective vocal chords  (untouched by any machine) of a great choir will tell you.

The world of organ-building is a good illustration of the benefits and limitations of instrumental progress. Technological advancement certainly has its plus points, and can on occasion act as a catalyst for musical inspiration. I guess that only a few diehard advocates of an extreme form of historically-informed performance would like to go back to the days of hand-pumped instruments (presumably with candlelit music desks), and it has to be said that just as Stravinsky’s Rite of Spring or Ravel’s Daphnis are unthinkable without the rise of the modern orchestra, so organ works such as Olivier Messiaen’s Méditations sur le Mystère de la Sainte Trinité or Jean-Louis Florentz’s Debout sur le Soleil have technological innovation as their condition of possibility (e.g. the advent of modern consoles equipped with playing aids allowing for rapid changes of colour).

Moreover, although it may be heresy to say so in some circles, the truth is that computer sampling has now made surprisingly (and perhaps worryingly, depending on your point of view) realistic and low-maintenance electronic instruments available to churches and concert halls at a mere fraction of the cost of the pipe organs they simulate. At the same time, concerning these sampled sounds, it needs to be emphasized that the best aural results are arguably obtained when the sampled material is that of old pipework (or pipes newly constructed using old methods). Contemporary algorithms may be impressive in terms of their power of calculation and processing speed, but essentially they are simply building on what has stood the test of time. 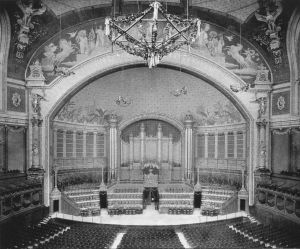 It is this relationship with the past which constitutes one of the most astonishing things about the organ as an instrument whether physical or digital: the act of musical performance on an organ whose sounding material may be three or four centuries old blurs the boundary between past and present as the pipes (metal or virtual) of bygone eras make today’s air vibrate in real-time. This translation of the past into present aural reality  is particularly successful when modern technology has returned old instruments to their former glory, as was demonstrated last week with a series of concerts in the Auditorium de Lyon celebrating the restoration of one of France’s most legendary organs, constructed by the great builder Aristide Cavaillé-Coll for the 5000-seat Palais du Trocadéro for the Exposition Universelle of 1878. Over the years, whether at the Trocadéro or the Palais de Chaillot where it was transferred in 1939 (with modifications by Victor and Fernand Gonzalez), this instrument has been intimately associated with some of the French organ’s finest moments: the first public performances of Widor’s Sixth Symphony and Franck’s Trois Pièces in the inaugural 1878 season, Marcel Dupré’s Chemin de la Croix in 1932, Messiaen’s Les Corps Glorieux (partially in 1941, complete in 1945) and the orchestral version of Maurice Duruflé’s Requiem in 1947.

Moved to the Auditorium de Lyon in 1977 after the transformation of the Palais de Chaillot into the Théatre National de Chaillot, by the 1990s the organ was already deemed in serious need of restoration. Its reinauguration this month after extensive work carried out by Michel Gaillard of the prestigious Bernard Aubertin firm of organbuilders sees the instrument – Trocadéro 4.0 – essentially restored to the combined colour palette of Cavaillé-Coll and V.&F. Gonzalez with the elimination of certain dubious changes brought about in 1977.[1] 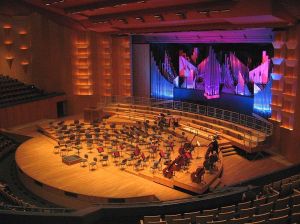 How does the restored organ sound? Unfortunately I was not able to attend in person, but on the evidence of the broadcast of this Tuesday’s concert with the Orchestre National de Lyon under Leonard Slatkin on http://www.medici.tv – a fantastic free streaming website which I wholeheartedly recommend – the results are pretty impressive. The limitations of any pipe organ in a dryish concert hall acoustic are obvious when trying  to convey the expressive content of music conceived for a resonant church, but the legendary 6,500-pipe instrument of the Auditorium more than makes up for it in terms of the power, brilliance and variety of its tonal resources.

The choice of Vincent Warnier as soloist for the evening, playing works by Saint-Saëns (his intriguing, if at times puzzling Cyprès et Lauriers, premièred at the Trocadéro in 1920 when the composer was 85) and Poulenc (Organ Concerto) could hardly have been more appropriate. As organiste titulaire of the church of St-Etienne du Mont in Paris (a post which he shares with Thierry Escaich, the Orchestre de Lyon’s resident composer from 2007 to 2010), he represents the musical inheritance of his predecessor Maurice Duruflé. The latter not only played the first performance of the Poulenc Concerto but assisted the composer – who had never written for the organ – with its registration as well as making an electrifying recording of the work with Georges Prêtre in St-Etienne du Mont in 1961. Vincent Warnier is a player of compelling physical and intellectual energy, as was evident not only in the Poulenc but also in an electric improvised encore on material from the concerto (start time 40:45). Watching him in action with Maestro Slatkin is also a particular pleasure for me personally as the two of us were both prizewinners at the international organ competition held in the legendary setting of Chartres Cathedral back in September 1992 (he for interpretation, I for improvisation) at the outset of his career. An event which brings back memories of evenings spent talking about everything and anything with Vincent over pizza while waiting for the final to arrive of a competition which in those days lasted a psychologically gruelling three weeks.

This was time of which I have two enduring recollections. One is having to re-heel my mouldy old organ shoes, which I still wear from time to time, after almost falling off the bench while trying [sic] to play a particularly tricky pedal passage in Messiaen’s L’Ascension during the semi-final. The second is attempting – not wholly successfully – to maintain my concentration in the cathedral organ loft during the final despite seeing another finalist (resident clown of the competition Mikael Wahlin, now one of Scandinavia’s finest concert organists) dressed in his nightgown, bottle of champagne in hand, letting off steam in an adjoining room full, somewhat surrealistically, of headless medieval statues. 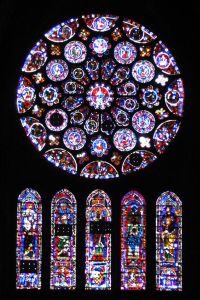 Francis Poulenc’s Organ Concerto is to this date more or less the only work for organ and orchestra since Handel to have attained a lasting place in the concert repertoire. Its unique status is due in part to the undoubted paucity of concertos for organ by composers of international stature, but I would like to think that there are also deeper reasons for its continued success. Completed in 1938 but substantially finished by 1936, the tightly-organized 23 minutes of Poulenc’s Organ Concerto grip the audience attention right from the declamatory opening bars’ evocation of Bach’s G minor Fantasia BWV 542 by means of dramatic, abrupt contrasts which never allow interest to flag during the seven brief interlinked movements. The work can certainly be labelled as neo-classical, yet this is not the flippant neo-classicism of many of Poulenc’s early works but something altogether more austere. This is a ‘Poulenc on his way to the cloister’, nodding in the direction of the 15th century, as he put it in a letter to Claude Rostand; the Concerto combines moments of unresolved harmonic anguish and rhythmically trenchant orchestral writing with passages of tender expressive yearning, culminating in the elegiaic viola solo just before the concerto’s final peroration. The composer thought of the piece as related to his sacred music (its echoes can be heard in his post-war operatic masterpiece, Dialogues des Carmélites), and the kinship is obvious with his Litanies à la Vierge Noire composed in the wake of his conversion at Rocamadour in 1936. 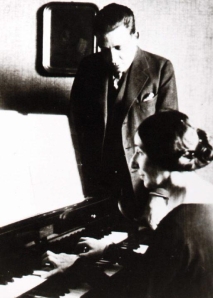 If the Poulenc Concerto remains a ‘one-of-a-kind’ work, the adventurous integration by a major international orchestra and conductor of the organ into their symphonic programming raises some interesting questions about the future of the organ in the concert arena.[2] Surely there has to be space in the schedules of all those symphony halls on both sides of the Atlantic in which expensive and underused ranks of pipes form a backdrop to the orchestra for more concertos with organ which, like Poulenc’s, might in some way form a ‘para-liturgical’ repertoire in the same way as Messiaen’s works for piano and orchestra? And if so, can space be found in the schedules of the world’s great living composers to write them, perhaps with the help of a modern-day Duruflé to help those unfamiliar with the organ to unlock the technical secrets of le Roi des Instruments?

[1] Gonzalez is a much-maligned name in the history of the organ in France; while his neo-classical aesthetic may be contested, the retention of his modifications of the 1930s to the Trocadéro organ is an acknowledgement of Gonzalez’s considerable historical importance.

[2] For a thought-provoking reflection on this subject, see The Economist’s recent blog article entitled ‘King of Instruments, back on stage‘.