It’s raining in Rome. The peculiarly melancholic quality of Italian rain (caught unforgettably in Andrei Tarkovsky’s film Nostalghia) is something which I have experienced on at least two previous damp visits to the Peninsula. The first was when I played a recital in the Pollini Auditorium in Padova and then spent a murkily atmospheric weekend with friends in a half-submerged Venice. The other was a trip to play at the ‘Marzorganistico’ festival in Noale, an occasion of which I have two principal memories; the first was being taken by my hosts to a restaurant after my first rehearsal and trying not to laugh when they admonished the chef in all seriousness that I needed an ‘intense meal’. The second was a watery car journey back to the airport marked by some fairly laconic conversation along the lines of ‘E bella l’Italia’[several seconds’ silence] ‘anche quando c’è la pioggia’ [nodding of heads: one of the joys of Italian is the unparalleled opportunities it offers even those of limited vocabulary such as myself to express a great deal by means of intonation and gestures].

By way of preparation for tonight’s ‘concert for peace’ at the Auditorium Conciliazione I decided to follow an intriguing trail laid by concert co-organizer Robert Moynihan in his biography of Pope Francis, Pray with me (written in the two weeks after his election, which is no mean a literary feat). One of the first surprises of what is turning out to be a Papacy based on the principle of ‘expect the unexpected’ was the Pope’s visit to the Cappella Paolina in the Basilica of Santa Maria Maggiore on the morning after he first appeared on the balcony in front of the cheering crowds. He went there to pray before the icon known as Salus populi romani (‘Safeguard of the Roman people’); I had been to the Basilica on a previous visit to the Italian capital a few years ago, but had somehow missed the icon, so I decided to go and investigate. What particularly interested me was its alleged paleo-Christian roots – like those of the Basilica itself, which are evident in its fifth-century architectural layout despite the ornate decoration of later periods -, of which I would not necessarily have been aware had I not read Pray with me.

Basically, legend has it that the icon of Christ and his mother was painted by none other than St Luke on the top of a table made by Jesus himself, one of the handful of personal belongings that Mary took with her when going to live with the Beloved Disciple after Jesus’s Ascension. Not only this, but as Luke was painting she related the narrative that we have as Luke’s Gospel record of Jesus’s birth. Now this is of course an extraordinary claim, and one downplayed by the official description in the Basilica itself (the scholarly consensus dates the icon to the sixth or seventh century). But whatever the icon’s actual provenance, it is historically certain that the idea was already established relatively early in Christian history of Luke the painter, entrusted by the apostolic community with doing the documentary work of a photographer today – albeit working with a radically different concept of visual ‘realism’ – in preserving the earliest traditions about Jesus and the events of his life.

Think what you may about all this. For my part, the story is one that fires my imagination, not least because of the questions that this ancient narrative poses to modern New Testament scholarship. Contrary to scriptural interpretations built on principles of ‘form’ and ‘redaction’ criticism which basically see the Gospels as layered embellishments upon a foundation that is difficult if not impossible to establish, the evidence of tradition is that the Church as it evolved in continuity with the Apostolic and post-Apostolic eras clearly took a very different position from modern scholars. For Christians of the first millenium, that the Gospels were eyewitness testimony was beyond dispute. 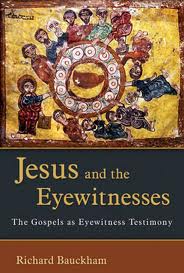 To stress the rootedness of the Gospels in historical events may be unfashionable thing in many academic theological circles today, but it is currently making something of a comeback in the Anglo-Saxon world. This is due not least to the ground-breaking work of Richard Bauckham, whose recent Jesus and the Eyewitnesses sets out the case (which I personally find compelling) that the literary techniques employed in the Fourth Gospel, when compared to other sources of the period, hint at its origins in testimony of those who actually encountered Jesus and his disciples. If this is true for the Gospel of John – leaving aside the vexed question of just which John or Johannine community may be the Gospel’s primary author – then surely the question also arises for Luke, especially given the explicit claim at the outset of the Gospel:

Many have undertaken to draw up an account of the things that have been fulfilledamong us, just as they were handed down to us by those who from the first were eyewitnesses and servants of the word. With this in mind, since I myself have carefully investigated everything from the beginning, I too decided to write an orderly account for you, most excellent Theophilus, so that you may know the certainty of the things you have been taught.

It is perhaps worth bearing in mind that Luke, being a physician, was a man of science acquainted with interfacing with the world of events, phenomena (a major focus of the Acts of the Apostles, a work which is if anything harder for the form critics to deconstruct than the Gospels, given that the gap between the events related and their literary narration is smaller), not just texts. Somehow I imagine him today doing dissection duty in the medical academy rather than doing seminars on literary theory. So the notion that the infancy narratives in his Gospel are essentially the editor’s free improvisation on apocryphal traditions seems hard to square with the methodology set out in his words to Theophilus. This is not to say that there is no theological program at work here, of course, but acknowledging this is quite different from saying that this theological program generated the material of the Gospels irrespective of the reality of the events in question.

In relation to Luke’s infancy narratives, the question of their origin is essentially one of deductive logic. Given that they were almost certainly written down at a time when two of the protagonists of the events concerning the Holy Family (Jesus and Joseph) were no longer on earth, who could the source have been for the account of, say, the Annunciation? Unless you wish to indulge in some complex intellectual gymnastics to explain away Luke’s claim that his ‘orderly account’ is grounded in ‘testimony of handed down to us by those who from the first were eyewitnesses and servants of the word’, that leaves only one possibility: Jesus’s mother. As the great French Mariologist René Laurentin points out, writing 30 years ago very much against the historico-critical tide, this does not at all mean that the Gospels are not also the product of the Christian community’s reflection – we are not dealing with ‘nothing but the facts’, as a basic principle of hermeneutics is that there is no such thing as uninterpreted data. It is nonetheless reflection on lived experience, the two components existing in a ‘both-and’, not an ‘either-or’ relationship, as indeed Luke’s Gospel tells us itself if we read attentively – Laurentin’s contention is that what we have is the ponderings of Mary’s heart on the remarkable doings of God:

‘Is acknowledging the fundamental role of realistic reference to the Christ of history to devalue the role of the Holy Spirit?’ in guiding the interpretation of the believing community, Laurentin asks? ‘Not at all. It is this community which has become conscious of Christ, expressing him in its prayer and in the Eucharist. It is within this community and for this community that the Gospels were written, that their authors informed themselves, that they sought to understand this event – as brief as it is disturbing – and to make it understood. Mary pondered in her heart (Luke 2,19 and 51) what she had experienced concretely.’[1]

So did Luke write down what he heard from the Mother of God Incarnate while painting on the table made by Jesus? I have no idea, just as I have no idea what historical relationship the icon in Santa Maria Maggiore bears to the events of the first century C.E. But could there have been such a conversation, and such a table? I don’t see any convincing arguments to the contrary.

The rain continued unabated as I came out of the Basilica and made my way back across Rome, pausing only to ask a Swiss Guard by St Peter’s for a ticket to Pope Francis’s General Audience tomorrow. Now that the extraordinary images of the Pope embracing a man suffering from terrible facial disfigurement at last week’s G.A. have gone viral on the internet, I’m anticipating a large crowd in the square in the morning. I’ll be packing my umbrella. Salus populi romani.